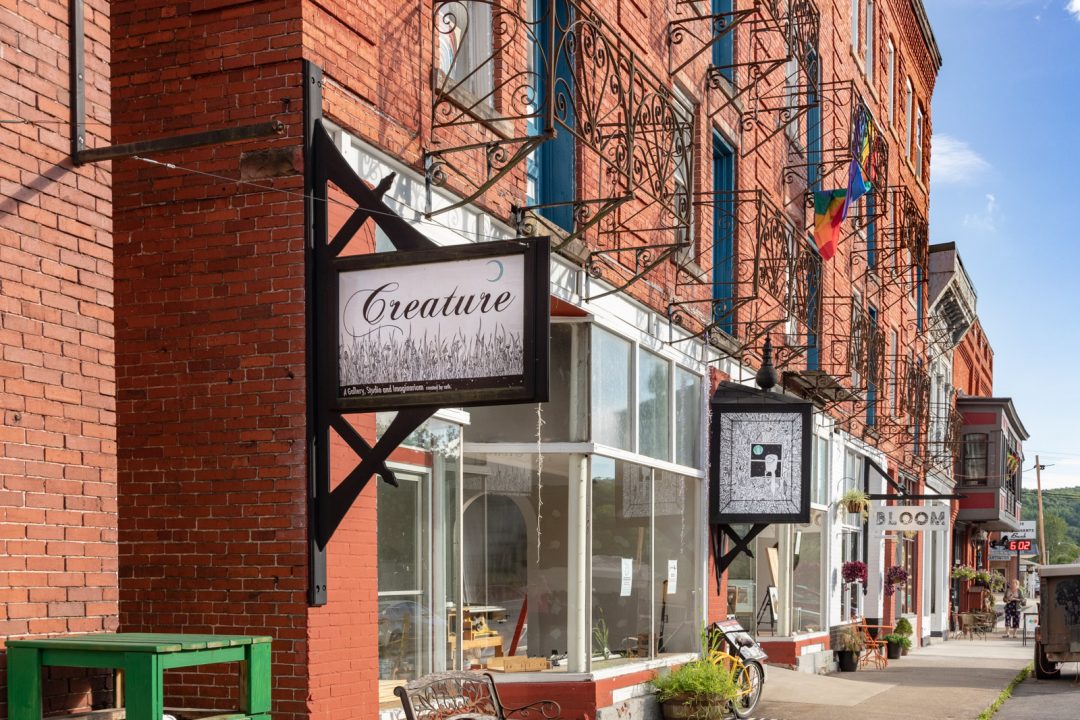 Thomas, West Virginia has always been populated by folks both fearless and imaginative. Settled in the 1800’s by several log cabin-dwelling families, historian T. Nutter wrote in 1906, “Wild beasts could be seen and killed from the very house doors.” In the year 2020, the viewing of art in Thomas has replaced wild beast sightings. How did this happen?

In 1884, coal was discovered. Until the closing of the last mine in 1956, there was an ebb and flow of prosperity. European immigrants migrated to the town that boasted a rail station with electric lights. They brought their music to Cottrill’s Opera House, and their stories were published in a state-wide Italian newspaper.

As with any rural mountain town, Thomas suffered an economic backslide once its surrounding resources were depleted. Yet, there were faithful local families that stayed and propped up Front Street with a few stores and restaurants. Still – empty buildings with sullen store fronts sat waiting patiently for their next incarnation.

In 2013, The Washington Post caught wind of a revival and published a story highlighting the upswing of Thomas tourism. Mentioned twice, in the good company of Tip Top and Purple Fiddle, was The White Room art gallery.

Seth Pitt, The White Room co-founder, doesn’t like to accept all the credit he receives for the re-emergence of Thomas.  He merits the community as a whole, seen and unseen makers, artists and residents.  In 2005, Seth moved to Thomas and began working at the Purple Fiddle. He did not observe a dying or defunct town. Instead, Seth says he arrived to “a loving community, living together and taking care of the town and each other.”

Art in Thomas was not a new concept. Mountain Made (now closed) resided in town for many years. The Buxton & Landstreet Gallery & Studios currently showcases fine art and features Appalachian artists. However, there was a definitive spark that ignited Thomas’s evolution into Tucker County’s art town. It began with a funky, communal art space in a building that once served as a grocer and department store. Friends Seth Pitt and Nathan Baker took up residence in 2005 and the empty building became a hub of artistic activity.

Seth refers to the space in the first rented store front as “a nameless ruckus room” that evolved into an accidental studio. “We ended up making art in it, and that informed [us] what the space was.” And so the creative clubhouse was born.

By autumn of 2007, the fledgling artists decided to present their non-traditional works to the public. They cleaned up the studio and cleared room in their upstairs apartment. Their art and works in progress were displayed, including a large installation in Nathan’s apartment. Next, they invited about 15 friends and placed a simple sign on the sidewalk, “Art Show.”

About 75 people toured the art-filled space that weekend. Seth sold his very first piece of art.

This led to the official opening of an art gallery, The White Room, in late summer of 2008. The five original collaborators of the gallery were Madelaine Richards (digital art and photography) Robin Quinlivan (painter and oil pastels) Nathan Baker (multi-media) Seth Pitt (illustration) and Sarah Hubbard (jewelry maker).

The first five years of business presented challenges. For years, folks would walk right by. The artists persisted. They were encouraged by the warm welcome from community members. Seth fondly recalls their loyal support. “People went out of their way to show us (by buying pieces for their homes) that they were glad we were there; we were working; we were trying,” he says.

In 2012, the now famous coffee shop Tip Top opened. They rotated solo shows by local artists on the cafe walls. This worked to increase the presence of art on the street. The expressive, quirky characters of Seth’s illustrations were finding their way into the hearts and homes of a growing number of non-traditional art admirers.

By the sixth year, The White Room gallery was full. Art in Thomas had taken root. It was time to expand. Several White Room artists opened a new gallery in 2014 called the Lamplight. In 2019, Lamplight became Bloom, a gallery known for its Artist Residency Program.

By 2016, Seth had a large enough body of work and following to branch out into his own gallery. He opened Creature, and his art is accessible online at The Art of Seth. Two years later, White Room artists Nathan Baker, John Ryan Brubaker and Kimberly Joy Trathen opened Gradient Project Space, an artist-run residency and project space next door to TipTop.

Cara of Tiny Llama speaks to the magical inspiration that is a town full of artists. Living in “nature’s playground” embraced by art and music, her desire to pursue creativity was awakened. Regarding the opening of her store, she says, “The thing I have found most beautiful about this place though, are the people. I’ve had such amazing support from friends and community members here, who helped fuel my courage to start a business in the first place.”

Many of the artists in town would probably agree with Cara’s next sentiments. “I am lucky to be surrounded by those who lift each other up regardless of gender, sexuality, or race. There are so many talented folks in this area who put their heart and soul into their work. I believe that energy is palpable to visitors of this area, and why many keep returning.”

Seth Pitt speaks for his fellow artists when he says, “We didn’t show up and save the town. The town and the people living here for so many years had saved a place for us.”

For 10 years, ArtSpring has been a steward of Tucker County Arts. Founded in 2011 as a way to support learning, emerging, and established artists of all types, ArtSpring offers resources to artists themselves as well as engages the community in the arts. ArtSpring is a collective of local artists and arts appreciators, as well as advocates and supporters.

The non-profit plays a vital role in the coordinating efforts of Tucker County artists. They produce the popular Memorial Day ArtSpring Festival as an opportunity for visitors and residents to observe the collective effort of the county’s dynamic arts community. Be sure to check the ArtSpring website for updates on the postponed 2020 festival.

Are you looking for an opportunity to make the world a better place? Chances are, you will be giving back without even trying when you purchase art in Thomas. As with many store-owners across America, the pandemic caused the unimaginable: a forced shuttering of  physical store fronts. Yet the artist community of Thomas has not skipped a beat. Their art is now mask-making. Their sales are part of socially conscious fundraisers.

Consumer activism is not a new concept to Seth. He and fellow artists often contribute to causes near and dear to them. But Covid-19 and recent social uprisings lead the artists to strengthen their resolve to integrate social responsibility into their commerce. Creature regularly sells pieces in which the majority of the proceeds benefit non-profits. These include NPR, NAACP and International Rescue Committee. Purchases on Seth’s Etsy store also offer an opportunity to give back.

In light of current events, there has been an effort by individuals and galleries to donate to four other organizations. Our Future West Virginia, Tucker County Family Resource Network, Womens Health Center of West Virginia and the Tucker County Schools Art Programs.

The Art of Mask Making

Perhaps the most endearing and expressive contribution is the tireless efforts of Thomas’ artists to make masks for those on the front lines. Studio Holler was formed to answer this need. It is a collaborative initiative of three textile artists: Kimberly Joy of Backstiched Design, Nellie Rose of Nellie Rose Textiles & Cara Danae of Tiny Llama.

Cara explains how it began. “It started because there was a dire need, our shops were closed, and we had the space and resources to make them. After fulfilling requests for frontline workers and immunocompromised individuals, we began looking at the demand from the general public. We believe wearing a mask can be a way for people to express their creativity and individuality, while still protecting those around them. So we have started making hand-painted, vintage print, and one-of-a-kind masks. For every one we sell, we donate one to those in need. This has allowed us to continue our efforts, and it has felt wonderful to be able to contribute in our small way.”

How will each gallery and artist rise above the ashes? Only time will tell. But one thing is for sure: Art in Thomas is here to stay.