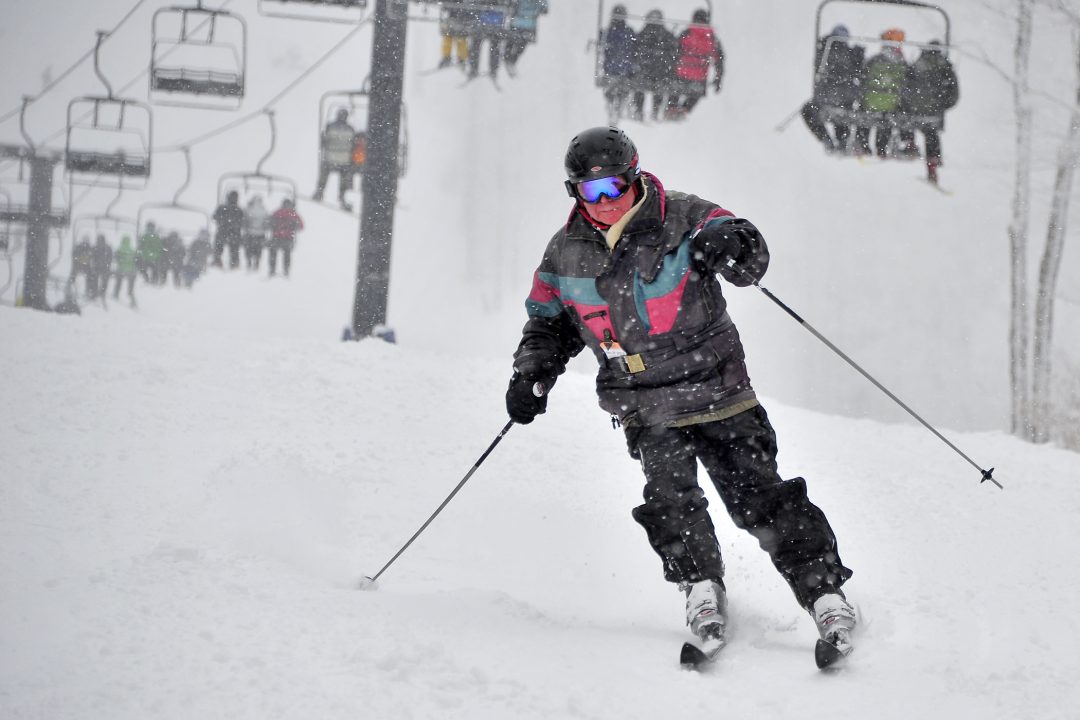 There’s snowhere like Canaan Valley. Tucked between Canaan and Cabin mountains in the highlands of Tucker County, Canaan Valley is one of the most unique landscapes in West Virginia. It’s also home to big storms, bigger snows, and the larger-than-life legends of Canaan Valley skiing.

With an average elevation of 3,200 feet across its rolling vast floor, Canaan is the highest large valley east of the Mississippi River. Comprising the eastern rim of Canaan Valley, Cabin Mountain’s west-facing slopes rise nearly 1,200 feet above the valley floor and boast an average annual snowfall of 155 inches. These snow-covered slopes are home to the birth of the Mountain State’s storied ski industry. Over the last seven decades, Canaan Valley has hosted several resorts, a growing cast of wintry characters, and seemingly endless memories.

In late spring of 1950, members of the Ski Club of Washington, DC heard news of massive snow drifts nestled in undulating meadows. A member of the club, a pilot, had spotted them while flying over the Canaan Valley region. In February 1951, Ski Club members Hal Leich and Gorman Young embarked on a road trip to discover Canaan Valley skiing for themselves. Leich used the pilot’s reports and studied topographical maps. He pinpointed the high-elevation slopes of Cabin Mountain in Canaan Valley as the likely location he’d spotted from the air.

As expected, the pair arrived in Canaan Valley and immediately found a large drift behind a farm house. They asked owners Hobe and Irene Mauzy if they could try skiing their property. The four became close friends and installed a rope-tow on the Mauzy farm. In doing so, they established Driftland, an unofficial ski area for club members. This marked the official start of West Virginia’s ski industry.

News spread rapidly in the nation’s capital of a promised land of skiing and reliable snow just four hours away in the West Virginia mountains. Cabin Mountain Ski Area officially opened in 1954 as the first private ski area south of the Mason-Dixon Line. The area featured two rope-tows that accessed 300 vertical feet and 40 skiable acres. Lift tickets were $1 for members and $1.50 for non-members. The National Ski Patrol established a ski patrol—this marked West Virginia’s first professional ski patrollers. Although it eventually closed in 1962, Cabin Mountain Ski Area set the stage for the growth of West Virginia’s fledgling ski industry.

Soon after Cabin Mountain Ski Area powered up its rope-tows, Weiss Knob Ski Area opened in 1955. This was the first commercial ski area south of the Mason-Dixon Line. Weiss Knob’s original slopes were part of what is now The Meadows area of Canaan Valley Ski Resort. The brainchild of Bob and Anita Barton, Weiss Knob Ski Area topped out at 3,900 feet and featured a T-bar surface lift and three rope-tows. “Bob and Anita Barton were instrumental in getting things started here,” said John Lutz, a legendary local skier who directed the ski school at Canaan Valley Resort. “Skiing really was the impetus that contributed to the early economy of the area.”

The Bartons ran the area until they were forced to close in 1959. The state of West Virginia acquired the land to create what would become Canaan Valley Resort State Park. But the Bartons weren’t done with Canaan Valley skiing just yet. The pair moved their operation just north to the slopes of Bald Knob. This site is now the White Grass Ski Touring Center. The Barton’s new resort featured four rope-tows and the first snow-making equipment in West Virginia. However, a significant amount of snow fell that winter, burying the rope-tow lift shacks and grooming equipment, effectively shutting the Bartons’ doors and dreams for the season.

But Weiss Knob Ski Area came roaring back the following winter. The area provided a decade’s worth of mountainous memories until the Bartons, driven out of business by the fancy new Canaan Valley Ski Resort, closed the doors for good in 1970. Skiers can still see Weiss Knob’s original hand-painted sign in the lodge at White Grass.

The state of West Virginia spent nearly 13 years acquiring land to fulfill its grandiose vision of a full-fledged ski resort and luxurious mountain lodge in the snowy land of Canaan. In 1971, Canaan Valley Ski Resort opened, offering 49 trails served by the valley’s first chairlifts. One lift served beginner runs; others swept skiers to the top of Weiss Knob to take advantage of the resort’s 850-foot vertical drop.

At the time, the resort’s terrain—which featured just one beginner trail—was considered mostly intermediate to advanced. As skiing technology and the skiers themselves improved, Canaan’s terrain became more user-friendly. Nowadays, beginner skiers go to the resort to learn, while intermediate skiers go to improve their technique.

The resort continues to upgrade its snowmaking equipment and capacity. It boasts a popular snowtubing park to put smiles on the faces of those who don’t want to test their luck—and their knees—on skis. Canaan Valley Ski Resort will celebrate its 40th anniversary in 2021, holding the title of the valley’s longest-operating ski resort.

The Rise and Fall of Timberline

Timberline enjoyed massive success into the early 2000s. It was widely regarded as having some of the steepest terrain in the mid-Atlantic region. The good times, however, started waning as the resort’s aging infrastructure slowly declined. Ultimately, financing fell through and Timberline’s owners experienced a continuous tangle of legal and financial trouble. Timberline Four Seasons Resort officially closed its doors in February 2019.

Canaan Valley skiers were devastated. They wondered if the resort’s legendary terrain would ever be open for skiing again. Speculation and rumors about what might become spread like a snow squall tearing through the valley. Those rumors were silenced when it was announced that Timberline was purchased at auction in November 2019 by Perfect North Slopes, Inc., an Indiana-based ski operation owned by Chip Perfect.

Rebranded as Timberline Mountain, the new owners and their team didn’t skip a beat. They tore down the rusted lifts by the spring of 2020. In their place rose two brand-new lifts, including a six-person high-speed detachable lift—the first of its kind in West Virginia. The Timberline Mountain team also invested heavily in upgrading the aging snowmaking system. Needless to say, skiers and snowboarders from across the region are beyond excited to see what the future holds for Timberline, now open for business as of winter 2020-2021.

No Lift Required! The Human-Powered Joy of White Grass

In 1980, cross-country skier Chip Chase was running White Grass, a Nordic ski touring center near White Grass Knob on Shenandoah Mountain in Virginia. Following the whispers of big snows in West Virginia’s highlands, Chase ventured into Canaan Valley to see what all the buzz was about. He came across the dilapidated ruins of Weiss Knob Ski Area and struck a handshake deal with the landowner. He consulted with the Bartons about his big dreams to develop a Nordic ski touring center in Canaan Valley.

Chase moved his operation across the border to West Virginia. White Grass Ski Touring Center opened for the winter 1981-1982 season. With no lifts or rope-tows, White Grass was—and still is—all about human-powered recreation on Cabin Mountain’s extreme terrain. “People still have a concept that cross-country skiing is flat, but the White Grass cross-country style is more backcountry skiing, especially with the way we’ve developed the ski trail system and kept it interesting through the years,” Chase said. “Some people like to ski up and down, and I say that’s our strong suit.”

Canaan Valley Ski Resort flanks White Grass to the south and Timberline Mountain to the north. The resort features more than 50 kilometers of trails over a sprawling section of Cabin Mountain. It’s not uncommon for adventurous skiers to buy a one-way lift ticket at Canaan. They ski from Weiss Knob to Bald Knob then drop down into the tangled network of cross-country trails and cap off the day with a meal at the White Grass Cafe. “It’s really unique because our trails are right next to Canaan’s trails, we essentially share trails and I hope we always will,” Chase said. “You can also go from Timberline to White Grass via Dolly Sods Wilderness.”

White Grass is considered a true gem of West Virginia, as well as the Nordic skiing world. The rustic lodge, warming huts scattered across the mountain and seemingly endless nooks of high-quality backcountry skiing offer a unique vibe. Chip Chase is a bit of a gem himself and will forever be deeply ingrained in the Mountain State’s skiing lore.

One particularly unique aspect of Canaan Valley skiing culture is the proliferation of Telemark skiing, an elegant style of skiing that combines elements of Nordic and Alpine skiing, where the skier’s heel isn’t locked into the ski. Telemark skiing is relatively uncommon across the country today, however, the Telemark turn is alive and well in Canaan Valley. “It flourishes here, I think in part from the tremendous amount of backcountry skiing that there is here,” said avid Telemark skier John Lutz.

Through White Grass, Chase and his merry band of freeheelers brought Telemark skiing to Canaan Valley. “We brought the technique and the gear; we had that extra spirit and talent and focus,” Chase said. “I think the fact that White Grass was such a close and active part of the community legitimized Tele-skiing. We’ve got a strong home base where a lot of people are dedicated to doing it.”

Some 60 years after Leich and Young set out to find Driftland, a dedicated and passionate group of Canaan Valley ski lovers set out to preserve it. In February 2018, Canaan skiers John Lutz and Kim Williams established the Snow Sports Museum of West Virginia (SSMWV) just over Canaan Mountain in the adventure town of Davis. The SSMWV aims to create and preserve a record of the people, places, gear and events that brought snow sports to the Mountain State.

Lutz arrived in Canaan Valley in the early 1970s, jumping boots-first into the ski scene. He was ski school director at Canaan Valley Ski Resort. He led one of the first ski school programs in the U.S. that allowed skiers on Telemark gear to teach alpine skiing lessons. Lutz spoke highly of the acceptance and friendliness he felt from Tucker County residents as the fledgling ski scene grew.

Now serving as liaison to the WV Ski Areas Association, Lutz is a local Canaan legend, well-known for his contributions to the valley’s ski scene over the decades. “Skiing created a lot of opportunities,” he said. “It’s been instrumental in starting the outdoor adventure segment in Tucker County, and, in a way, the renaissance of Davis and Thomas.”

History is Still Being Written

Despite the establishment, growth, and competition of ski resorts in Canaan Valley, over the decades not much has changed in this relatively rural and undeveloped area. “The unique culture of Canaan Valley has been influenced by skiing, and it’s directly related to the beauty of the area and the type of people who have lived here,” Lutz said.

With the three ski resorts—Canaan Valley Ski Resort, White Grass Ski, and Timberline Mountain—still defining the scene, it looks like skiers have a bright future in Canaan Valley. As Canaan Valley regulars continue to influence and write the region’s history, a new cast of snowy characters is bound to arrive and change the game once again. “It does feel like a new age of skiing and it’s just going to mature even more,” Lutz said. “I think it’s going to produce some great skiers in this area and take skiing here to the next level.”