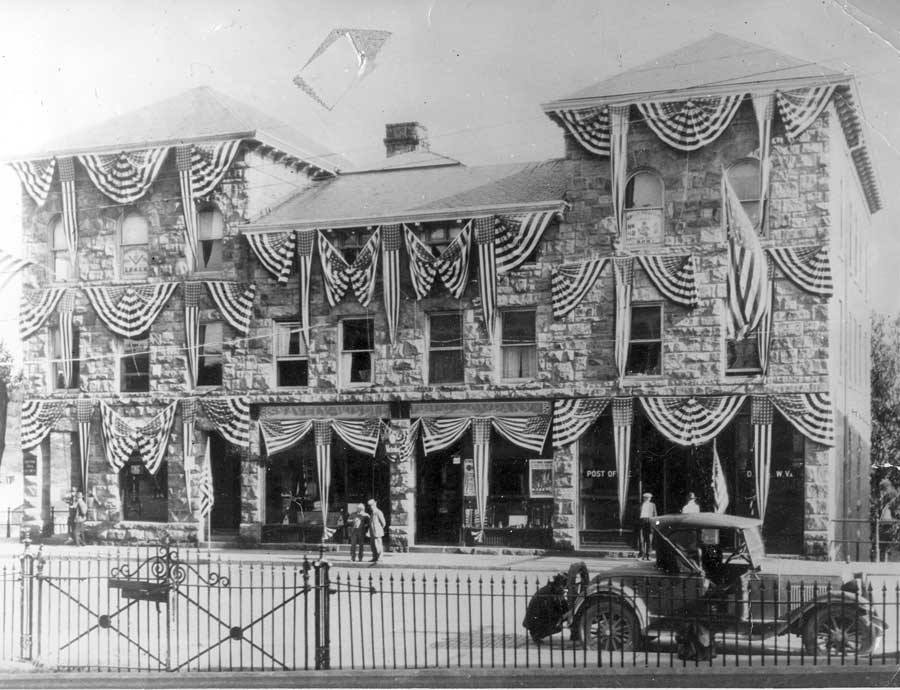 The Land of “Canaan”, Land of Opportunity

Davis lies in what was once known as the Great Wilderness, attributable to its once unforgiving acres of heavy forest, nearly impenetrable clusters of rhododendron, and impossible peat bogs. It is said that in some areas, a horseman could spend an entire day making only a mile or two. Legend has it, the first exploration of the area by non-natives occurred with the incursion by fur traders in the mid-eighteenth century. Trapping of beaver, muskrat, mink, otter and martin provided income for many intrepid outdoorsmen willing to brave the often extremely harsh winters, which were recounted to be much longer and colder than those of today.

The region was sparsely populated until the arrival of the lumber industry late in the nineteenth century, spurred by Henry Gassaway Davis, and his railroad. This first railroad, the West Virginia Central & Pittsburg, entered the region in 1884 to transport lumber and then coal to Elkins and Oakland, MD. Col. Robert Ward Eastham, a resident of Canaan Valley was contracted to “build” the town of Davis, and constructed the first house in Davis at the confluence of Beaver Creek and the Blackwater River. Eastham, a native of Rappahannock County, Virginia, moved here with his family about 1885 and originally settled in what would become known as Canaan Valley.

The name Canaan is ascribed to an apocryphal account wherein some early visitor to the region stood atop some prominence, looked out upon the verdant valley and proclaimed: “Behold the Land of Canaan.” Who knows, maybe he did. Sometime later, Eastham developed into somewhat of a scoundrel and in 1897 was convicted of killing one of his business adversaries. Somehow, he managed to escape jail and returned to Virginia where he died, peacefully, in 1924.

The Railroad and Davis’s Beginnings

The first official residents of the Town of Davis were Mr. & Mrs. James Parsons who arrived by train in 1884 and lived in a box-car. Mr. Parsons was a surveyor for the Railroad Company and he laid out the town that Eastham would build. Parsons named the three main east-west streets (wisely) for his employers the Davis Brothers; Henry, Thomas, and William. The town known as Davis was located on a rectangular tract that measured 2,800’ x 1,600’ owned by H.G Davis. Interestingly, Davis, the prominent senator and industrialist who created the town with his name, never actually resided in it.

The WVC&P Railroad entered Davis from the northwest, through Thomas, and ran south of William Avenue between there and the Blackwater River. Before too many years, daily trains were running between Davis and Cumberland, MD, then connecting to points North and East. Davis was initially referred to as “stump town” as in the very early days it was said one could travel through the entire town by stepping from tree stump to tree stump.

The town’s growth was rapid and by 1886 Davis had a post office and several businesses; the Jacob L. Rumbarger Lumber Co. and the Fayweather & Ladew Tanning Co. This established Davis as one of the earliest lumber towns in the state. The town was officially incorporated in 1889 with a population of 909. In 1893, just 13 years after Edison invented the electric light a power plant at the mouth of Beaver Creek furnished electricity for town streetlights and some homes. The Davis Gas Light Company occupied a second-floor office in the newly constructed bank building, on William Avenue. The phone company occupied an office in the same building.

Homes and businesses in Davis were constructed of readily available wood; the sandstone National Bank of Davis building, notwithstanding. Timber, leather and coal businesses flourished through the 1920s. These included the Blackwater Lumber Company, the Beaver Creek Lumber Company, the U. S. Leather Company, the West Virginia Pulp and Paper Company and the Davis Coal and Coke Company, which was among the largest coal companies in the world. All these industrial operations were located along the Blackwater River and Beaver Creek, south and west of the center of town. The coal was shipped to Thomas for conversion into coke for the many steel companies in West Virginia on the Ohio River and north to Pittsburg. You can still see the remains of some of the over twelve hundred coke ovens if you drive past the B & L building in Thomas, toward Coketon.

By 1900 Davis was a bustling and vibrant community. The town’s businesses included a bottling works and several hotels; the Virginia House, the Blackwater Hotel, and the Hotel Howard, which stood diagonally across from the historic Meyer House at the corner of Thomas and 3rd. A brick public school, later the Davis High School, was opened in 1903 at the corner of Kent and 5th Streets. The tannery’s superintendent and his assistant set up a Sunday school in 1886, meeting in the railroad meeting house. The superintendent being Presbyterian, and his assistant, Methodist, resulted in the creation of the first two church buildings, one of each faith, in 1887. The large Lutheran church at the corner of 3rd and Blackwater Ave was constructed in 1894. It stands today, and hosts very impressive 50-foot long, single-timber roof truss supports; unheard of in today’s laminated beam construction.

The Davis High School became the Junior High when a High School was constructed in Thomas. Unfortunately, the town of Thomas was riddled with mine shafts and over one Christmas Holiday the school collapsed into one of the shafts. It fortunately being a holiday, no one was there. The high school students moved back to Davis, making the school in Davis a combined junior and senior high school. Years later, the Davis School was destroyed by a local, crazy arsonist and students had to move again, this time to the newly completed Tucker County High School midway between Thomas and Parsons. Of these original iconic buildings, only two remain; the large, green, Lutheran church at Blackwater and 3rd street and the National Bank of Davis Building at William and 4th.

By 1902, Davis had an official population of 2,319 and more than 80 businesses, including three hotels, a bank, five restaurants, two sawmills, a box factory, shingle mill and tannery. There were seven churches and as many saloons, with the latter likely having preceded the former. Davis had the first hospital in Tucker County. Founded in 1907, Allegheny Heights Hospital operated until 1929 in the large house where Fairfax S. Landstreet lived (at the corner of 4th and Thomas Avenue.)

Although there were a succession of sawmills, owners and names, the first was started in 1886 by Jacob L. Rumbarger, a cabinetmaker from Indiana. This mill and those that followed processed cut timber along much of the Blackwater River, in Canaan Valley, along Beaver Creek, on Canaan Mountain, the Blackwater Manor Tract, Cabin Mountain and Backbone Mountain. The Rumbarger mill was followed by the Albert Thompson’s Blackwater Boom and Lumber Company, then The Babcock Lumber and Boom Company which began operating in Davis in 1907.

During the 17 years that the Babcock mill was in operation, it sustained one continuous nine year stretch without an idle day. The plant operated two saw mills in Davis, one for hardwoods and one for softwoods. When the Babcock mill closed, 38 years of large scale lumbering ended in Davis. This single plant was said to have manufactured a staggering 856,985,714 board feet of lumber. Several histories indicate the several lumber companies produced well over a billion board-feet of lumber, more than enough lumber to build some 100,000 homes.

Prosperity Comes to an End

By the late 1920s, Davis was essentially finished. All the fur-bearing animals had been trapped and the trees had all been cut, and the easy-to-get coal had all been mined. A few remnants of Davis’s one-time glory remained, with a tannery operating until 1975. The lumber mills along the river were all torn down in the 1950s, having sat idle for twenty-five years. The railroad hung in until 1984, exactly a hundred years from the time it began, but passenger service had been discontinued in 1942. Population dropped to 624 in the 2000 census.

By the 2010 census the town’s population had risen to 660, the first increase in a hundred years. The intervening years have seen a resurgence of interest in Davis and the surrounding community. New people have moved in and opened exciting new businesses. There is a movement to spiff up the town’s appearance. Many abandoned buildings are being renovated or replaced with modern structures. There is a vibrancy in the air that has been missing since the demise of the wood and coal industries. We see renewed interest in the many outdoor activities for which this area is famous. Environmentally sensitive townspeople are installing new solar systems. Abandoned properties are being cleared; in short, the town is coming back to life.

Several mines still operate within a few miles, supplying coal for the Mount Storm Power Plant and providing employment to a scant few miners. The coke ovens nearby in Thomas are abandoned, but a few fortunately remain for reflection on a bygone era of prosperity. You may want to visit the once proud Cottrill’s Opera House in Thomas, a venue that provided Vaudeville era entertainment for the local citizenry. It is being slowly renovated to its former 365 seat grandeur.

Davis is uniquely situated within a few miles of two State Parks, three if you count the Fairfax Stone Park, north of Thomas, the official headwaters of the Potomac River. The area enjoys two ski areas, a golf course, hundreds of miles of hiking and biking trails, not to mention regularly stocked streams for fishing and recreation. The recent years have seen an influx of people who came to the area to recreate, and decided to settle.

Yes, Davis is on the grow again, this time fueled by renewable resources: the temperate Summer climate and myriad year-round outdoor activities. Winter snowfall averages just under 200 inches a year, sustaining a variety of cold-weather activities, and only a few Summer days reach 80 degrees. City residents appreciate the nearness of this get-away location, and as Rt. 48 (Corridor H) is completed linking Davis with points East, the flow of visitors will only increase. For the town of Davis and the community, the future is looking up.

For more about Davis and Tucker County, the following web-sites provide useful information, some of which was used in the compilation of this document: