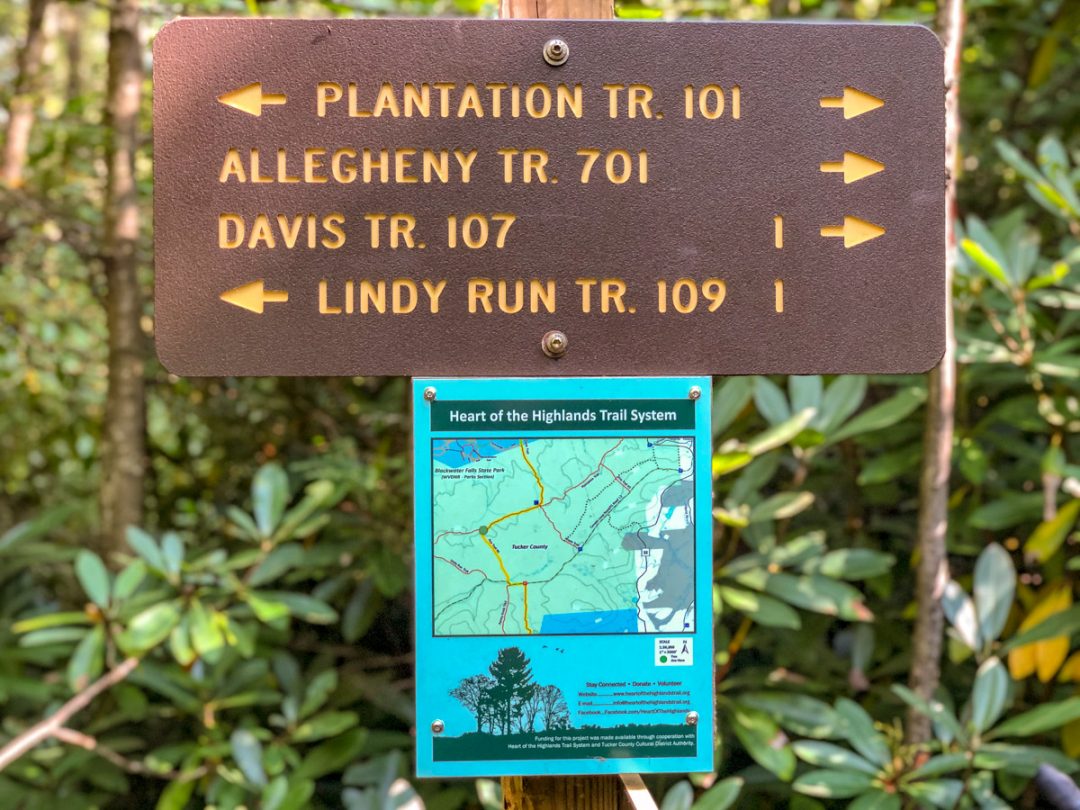 Dobbin House. Splash Dam. Plantation. Moon Rocks. These famous names are synonymous with the beloved network of well-trodden Tucker County Trails. While visitors and residents alike know these rugged trails like the backs of their hands, few know the true stories behind their names.

Situated among the beautiful bogs and boulders of the Allegheny Highlands, over 200 miles of trails criss-cross the communities of Davis and Canaan Valley. Many of these Tucker County trails traverse a diverse matrix of public lands, including national forest, national wildlife refuge, state parks, and state wildlife management areas. Hikers, hunters, backpackers, boaters, mountain bikers, and anglers descend upon Tucker County year-round to enjoy these adventurous avenues. From gentle walks along the tranquil, meandering upper reaches of the Blackwater River to steep, rocky paths along the rugged slopes of Canaan Mountain, these trails hold something special for every variety of outdoor enthusiast.

What’s in a Name?

When hiking or biking Tucker County trails, the mind tends to freely wander. Between browsing rare plants and verdant mosses and gazing at the diverse forest canopy, one might wonder about the story behind the name of the trail on which they travel. While most trails have an interesting story, some names stand out above the rest.

Eventually, the entirety of The Blackwater Manor property was logged and portions were strip-mined for coal. All that remains today is the ruins of a partial foundation and a well, which the Ruins Trail bisects. The site isn’t marked, so adventurous explorers will have to keep their eyes peeled to spot the ruins. Those who find the well and the few remaining foundations blocks will find it hard to believe that a mansion once stood on the spot that’s been largely reclaimed by the forest.

The Dobbin House trail system, which includes Dobbin House, Pase Point, Woodcock, and Dinky Jumpoff, is an excellent zone for mountain biking, hiking, and trail running through maturing spruce and hardwood forests. It offers a glimpse into the region’s industrious past while showing how, when left to the unrelenting hand of time, nature can reclaim even the most scarred landscapes.

Splash Dam – From Logs to Roots

Forming at the base of Mozark Mountain in the southern end of Canaan Valley, the storied Blackwater River begins its 34-mile journey to join the Cheat River near Parsons. Along the way, it meanders through Canaan Valley, weaves past Davis, and plunges over the Connoquenessing sandstone to form Blackwater Falls before traveling through its namesake canyon. While the river appears to be a wild and scenic watercourse today, it was once the site of much industrial influence and alteration.

When the boomtown of Davis was at its height in the early 1900s, the Blackwater River was used primarily as a path to float the massive logs milled from red spruce trees, and as a source of water for the leather, pulp and milling industries. Just upstream of Davis sat a special dam where the river level was raised or lowered and the dam gates were opened to allow the collection and downstream transport of spruce logs to the mills in town. This style of dam is called, you guessed it, a splash dam.

While the industrious past and its structures have been all but erased from the Town of Davis and the Blackwater’s forested banks, the Splash Dam trail memorializes that logging legacy as it follows the Blackwater along the calm pools and riffles where the dam once stood. Starting in Davis just across the Route 32 Bridge, Splash Dam meanders through a lush mixed hardwood and hemlock forest, snaking right alongside and away from the Blackwater along its course. This rooty, rocky trail is a technical test-piece for both mountain bikers and trail runners.

After the clear cutting spree of the early 1900s, denuded slopes in West Virginia led to flash flooding that devastated downstream communities all the way to Pittsburgh, Pennsylvania. To address the need for flood control and prevention via reforestation, the Monongahela National Forest (MNF) was established in 1920. While nature has a way of healing itself over time, humans stepped in to expedite the process. The first landscape-scale reforestation efforts in the MNF took place right on the western slope of Canaan Mountain just above Davis. Between 1925 and 1933, plantation crews planted more than 1.5 million Norway spruce seedlings across 2,400 acres. Those hand-sewn seeds became towering trees that reign supreme over an enchanted forest. Cutting through these plantation spruces and across Canaan Mountain for 16 miles, the Plantation Trail honors the environmental efforts of those crews.

In the century that has passed, this well-trodden trail has been at the center of many a mountainous memory. Contained entirely within the spectacular Canaan Mountain Backcountry area of the MNF, Plantation still entices bikers and hikers to this day. Come hike its magical forests to celebrate the MNF’s Centennial this year—just be sure to bring your muck boots!

You don’t have to board a rocket to set foot on the moon. All you need to do is travel to the Yellow Creek Preserve and hike on the out-of-this-world Moon Rocks trail. Located just outside of Davis, the Yellow Creek Preserve was purchased by the West Virginia Land Trust in 2019 and will be protected for generations to come. While the massive sandstone bedrock that creates the otherworldly feature is 480 million years old, the history of the Moon Rocks trail only dates back some 40 years.

In the mid 1970s, a preacher in Davis hoped to boost the local economy by bringing the national grand prix off-road motocross series to Canaan Valley. The Blackwater 100 was born and became known as the “toughest race in America” for almost 20 years. As hundreds of motorized participants made their way around four 25-mile laps, each passing of the studded tires stripped the topsoil away. Coupled with heavy rains and other natural means of erosion, a half-mile section of bedrock was eventually exposed and pitted to form the features of the beloved moon-like surface.

Moon Rocks is now a nationally-known phenomenon that attracts bikers from Florida to Canada to test their grit and find a line through the grid of potholes and ridges. A well-placed American flag at the summit lets conquerors of the rock bask in victory as if they’ve taken one giant leap for mankind.

These four trails represent just a portion of the paths to be explored in Tucker County. Lace up your boots, air up your tires, and plan your visit to explore the wealth of Tucker County trails. Who knows what secrets and stories you’ll discover along the way?

Article by Dylan Jones/Verglas Media
Featured Photo: The Plantation Trail is a vital artery through a lush and drippy forest, long recovered form the logging of a century earlier. Photo credit: Victoria Weeks
–Article has been updated–