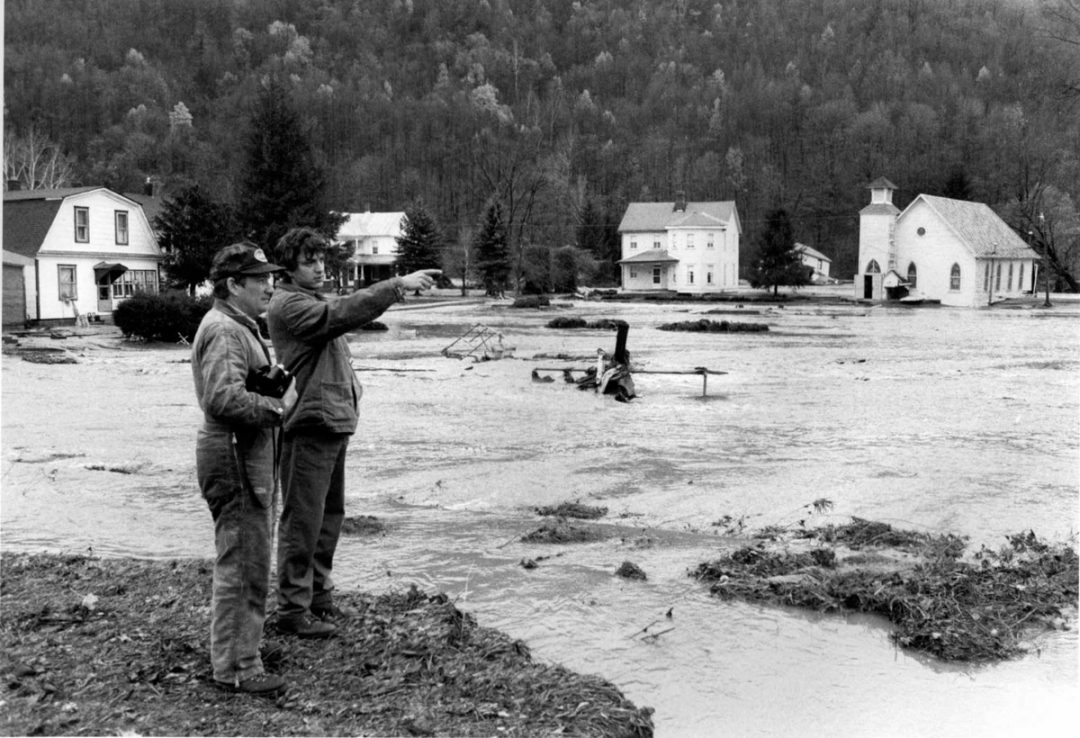 On the 35th anniversary of the Great Flood of 1985, we turn our sights to West Virginia’s vast Monongahela National Forest. An area of unparalleled beauty, it will become home to unprecedented destruction on the night of November 4th, 1985. The 1.7 million acre watershed drains farms, hamlets and popular recreation areas including Dolly Sods, Otter Creek and Blackwater Falls into five tributaries–the Glady Fork, Laurel Fork, Dry Fork, Blackwater and Shaver’s Fork. Parsons, seat of Tucker County, sits at the confluence of these five rivers–combining to form the Cheat River–which flows directly through town.

People have settled along these tributaries for generations. They live in tight-knit communities bound together by a culture of church, work and kin. Those community bonds would be severely tested on the night of November 4, 1985.

“My Dad Called and Told Me It Was Going to Flood”

Starting on November 1st, a stalled tropical storm system dumped four days of rain, soaking the region. As the rains fell, residents in low lying areas watched water levels rise but could not anticipate what was to come. By the evening of November 4th, the rivers in Tucker County began to overflow their banks. The Flood of 1985 had begun.

As the upstream communities of Jenningston, Hendricks and Hambleton were inundated, buildings and livestock were swept into the roiling water; it all flowed into Parsons. Bridges and roads were overrun. Sheds and porches broke loose. Flotillas of cars and trucks crashed into buildings. Whole houses and trailers disappeared down the river. The mayhem continued downstream, to St. George, Albright and Rowlesburg.

“How Foolish I Was”

As the waters rose, many, but sadly not all, low-lying residents scrambled to higher ground. A few chose to stay, confident their well-built homes would survive. Through the night, emergency responders fought deadly, roaring, debris-laced water to reach survivors. Mariwyn Smith watched from her second-floor stairs as logs and water swirled in her downstairs living room. As the night wore on, she and her daughter finally went to bed, doing their best to sleep as the destruction raged downstairs. She later regretted she had not carried more of her belongings upstairs.

“A Force to be Reckoned With”

During the night, county nurse Diane Hinkle was dispatched to Parsons with a supply of tetanus vaccine. She began to immunize survivors and take blood pressures. Soon others appeared with food and clothing. A shelter was set up in the grade school with cots and blankets for the newly homeless. As the night waned and volunteers prepared hot coffee, townspeople awakened to the devastation around them. For many, a lifetime of work and memories had simply washed away.

The outpouring of support bolstered survivors in the early hours of the disaster. For Hinkle, watching residents selflessly help each other was a defining moment. It showed the community’s character and strength, and the generosity of its people.

“They Said Our Town is Gone”

The flooding ended almost as quickly as it began. By the next day much of the water had receded and residents came outside to survey an unfamiliar landscape. Some homes had simply disappeared. Countless more were badly damaged. There was no water or electricity, no more grocery store or pharmacy. Vehicles had been swept away.  Quaint tree-lined streets had become a nightmare of foul-smelling mud and dangerous debris. Miraculously, only five lives were lost in Tucker County. All together West Virginia lost 47 lives in the great Flood of 1985 and suffered $700 million in property damage.

Within days the river communities of Tucker County began receiving donations and volunteers. Without vehicles, few could get out for needed supplies. Clothes and food poured in. Volunteers peeled potatoes, shoveled mud, washed filthy clothes and linens and cooked three meals a day, plus snacks, for survivors and workers.

Church groups, Boy Scouts, the Red Cross and the Salvation Army showed up. People just came and helped, without being asked, and no one expected thanks.

Newspapermen repaired damaged equipment at The Parsons Advocate so a newspaper could be printed. The paper became a valuable source of information for what was being done and what was needed. Eventually utilities were restored, just as cold weather set in.

The Flood of 1985 tested the community’s reserves like nothing had before. Governor Arch Moore declared Parsons the most devastated town in West Virginia. FEMA officials brought relief and badly needed trailers for the homeless. As the weeks passed, and politicians and reporters moved on, survivors began the slow exhausting work of recovery.

One year later, a commemorative issue of The Parsons Advocate listed the many properties still missing or damaged. Some residents simply left. Between 1980 and 1990 the city of Parsons lost 25% of its population. Many businesses chose not to rebuild, and the city lost many jobs. Many low-lying and hard-hit areas were declared off limits to rebuilding, leaving gaps in the once prosperous community.

In time, groups formed to rebuild infrastructure and plan how to mitigate future disasters. A plan was developed to raise the height of the flood walls at Parsons: The “Cookie Ladies” sold baked goods to help fund the project. Inspired by the community’s generosity after the flood, the Tucker Community Foundation was created. Today its multi-million-dollar endowment supports a variety of worthwhile causes and celebrates community spirit, community values and self sufficiency in seven rural counties.

A New Respect for the River

The five forks of the Cheat River are born in some of the most rugged forests in the Eastern US. Today their confluence near Parsons hosts a world-renowned bluegrass festival, a 24-mile bike trail, and a whitewater rafting outfitter. Yet survivors of November 4, 1985 will always remember how powerful and destructive these beautiful rivers can be. The Great Flood of 1985 will never let them forget.

About the Photographer, John Warner

When the Flood of 1985 hit, photographer John Warner of Hendricks had just been selected as the county’s Artist in Residence for the year. As the waters rose, he was able to capture some of the earliest images. Warner shot over 200 rolls of film, which he personally processed in his home darkroom. He now lives with his wife in a home they built on the Dry Fork River above Hendricks, near the mouth of Otter Creek.

“The Flood of ’85 Commemorative Edition,” published 2015 as a special supplement to The Parsons Advocate.